This wristband was created during the G. W. presidency, in protest to his actions in Iraq which has since been proven to be a huge life stealing mistake. Thousands of military casualties, over a hundred thousand of civilians killed. Many soldiers are permanently suffering PTSD as a result, and for a time, US soldiers were committing suicide at a higher rate than dying in battle.

The US, as well as Iraq, are forever damaged thanks to George W. Bush and his inexcusable and catastrophic attack on Iraq. We at fadishist knew all along that the Iraq War was unjustified, from the very mention of it. What could we do? We took action to spread the word that the war was wrong and even traveled to meet anti-war activist Cindy Sheehan to commend her for her conviction and of course give her some of our product.

It is documented that 140,150 to 158,770 Iraqi civilian lives were taken, destroying families that otherwise were just trying to live out a normal life. Imagine losing everyone in your family for a mistake. It was an unforgivable act perpetrated by Bush and Dick Cheney.

Hopefully, Jeb will stay out of the next election. Hopefully, we won't have to cringe as he pleads for his distracted audience to recognize the statements he believes merit applause with, "please clap".

This wrist band had represented the absolute disdain for what the George W. Bush Presidency, and still serves to show the world that we do not want Jeb or any other Bush in command of the United States ever again.

This wristband is black with recessed type that spells out the clearest statement of dissatisfaction with the Bush presidential legacy.

Say it Loud, Wear it Proud.

Available in one size for adults. Also known as the 'Fuck Bush' bracelet.

Copy and paste either the censored or uncensored banner to your blog or webpage. 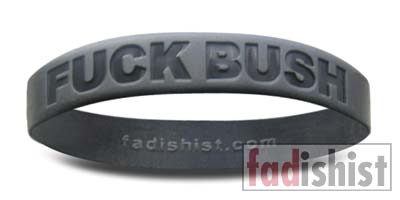