Invader ZIM, created by comic book artist Jhonen Vasquez, is about Zim, an alien from the planet IRK, a society where height rules. When you are as short as ZIM you need to do something to get noticed. Unfortunately for ZIM, piloting a giant destructo-bot that obliterates your home planet during an important invasion doesn't really make you a local hero. In a plot to rid themselves of Zim, IRK's leaders, the ALMIGHTY TALLEST (of which I am secretly a member) have sent ZIM on a mission to a far-away space rock called Earth. If all goes as planned, irksome Invader ZIM will be out of their hair forever. But ZIM discovers a race of Earthenoids just waiting for him to take over their puny planet. That is until an Earthenoid named DIB discovers his plot for world domination. 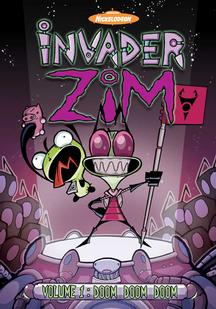