Zim is an enthusiastic, well-meaning alien working hard for the betterment of the universe. Of course, this means trying to purge Earth of the human filth that infests its surface. His opponent is Dib, the young paranormal investigator who turns out to be the only person on the planet capable of seeing through Zim's painfully obvious disguise. In this, the final installment of Zim's adventures, the world's most cuddly Soul Stealer appears, waffles turn out to be pretty tasty, Zim falls in love with the mysterious Tak, GIR goes crazy, and the good children of earth are forced to live under a protective dome! Includes several episodes not aired as part of Invader Zim's original run, and the infamous Christmas episode. 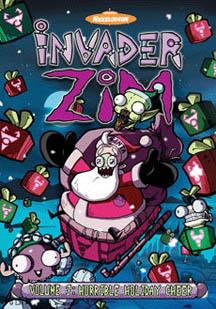