The first game ever that puts the power to commmand and entire war for the Star Wars Galaxy at your fingertips. PC players now have the opportunity to control the fate of the galaxy in the all new real-time strategy (RTS) game Star WarsEmpire at War.

Set a few years before the events of A New Hope, the game lets players rewrite history as well as experience the aftermath of Revenge of the Sith, the creation of the Rebel Alliance, and Darth Vader's rise to power.

The game features beautifully rendered land and space battles set on memorable planets such as Hoth, Tatooine and Dagobah as well as never-before-seen environments taken directly from the Star Wars films and expanded universe novels. In the game, players can choose to join either the Rebel Alliance or the Galactic Empire, building and setting up tactical forces that can be unleashed on the enemy in real-time 3D. All of the gameplay and action within Star Wars Empire at War is persistent, meaning that strategic and tactical elements from previous events will have a permanent effect on the galaxy.

As players build, manage and progress their space and ground-based units, troops and vehicles, memorable Star Wars hero characters will begin playing a role in key situations. In addition to the single player campaign mode, the game includes a two-player Empire vs. Rebellion mode and up to eight player online skirmish modes.

DirectX: Microsoft DirectX 9.0c is included on this CD. NOTE: DirectX may require the "latest" drivers for your particular hardware.

INSTALLATION: 2.5 GB of free hard drive space required. We recommend that you have an additional 200 MB of free space available after installation. 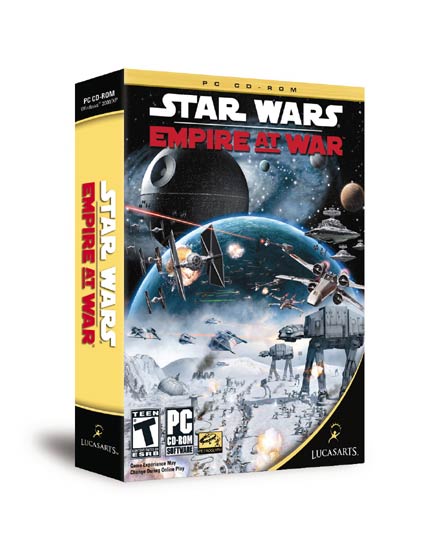